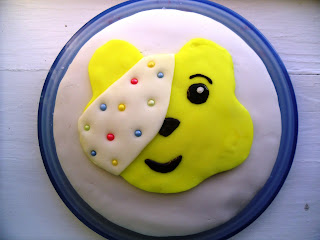 Sorry it's been such a long time since I posted anything new, but at least I have kept you waiting for something good! Last week was of course Children In Need and for the first time ever I decided to get creative and try and raise some money for the charity. I asked round in work if people would be interested in having a bake sale all week and I got a brilliant response! Quite a few people were keen on baking something, while a majority were unsurprisingly happy to eat the treats and donate. And no one was left disappointed!

On the first day I brought in gingerbread men, cut with my new gingerbread men cutters which I got for my birthday. I loved how they looked but unfortunately a few things went a little wrong. I made baking error 101 - I got distracted by the X Factor results and I let my second batch of biscuits burn slightly. Then my raisins, which I used to make the buttons didn't stay in place, and last but not least I tried to make a piping bag to ice the biscuits but instead I pressed it too hard and it exploded all over the place, leaving my gingerbread men a little naked and a little boring. So, as you can tell I was a little disappointed by the outcome. However, they seemed to go down quite well in work so as long as the charity gained that is all that mattered! 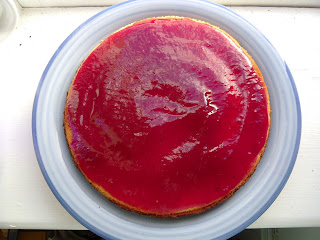 Now, I can't take all the credit for raising lots of money for Children In Need, lots of lovely people from work put in the elbow grease and got baking. On the first day, not only did I provide gingerbread biscuits but my colleague Ed made scrummy banana and fudge biscuits from the Dan Lepard book which went down very very well! On Tuesday another lovely colleague Kat, made chocolate brownies, and although I wasn't in work on the day to try them, my boyfriend had one and thought they were delicious! And so the week continued... Caroline made heavenly lavender cupcakes, Joel made amazing Portuguese custard tarts, Helen made adorable teeny tiny mini cupcakes and Charlotte made a loaf of very tasty bread!

When I first came up with the Children In Need bake sale the first baking idea I had was that I wanted to bake a cake. I had recently bought some cake tins, which obviously needed using, and I had also never attempted to bake a cake before, so this was my best opportunity. And I was over the moon with what I made! 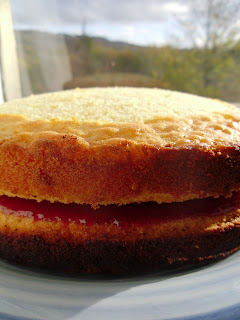 It was a traditional Victoria sponge cake from the Great British Bake Off book I got for my birthday with a little Pudsey twist! I won't bore you with too many details but I can't describe how happy I was when I made it! From making the sponges to the raspberry filling and finally the Pudsey design of icing, thankfully nothing went wrong! The whole process took 4 long hours but hopefully you will agree from the picture that it was worth it! The sponge was nice and light, the icing didn't dry out and most of all my creativity actually worked!! The only issue I had with it at work was that I think people didn't want to cut a slice of cake, because they didn't want to ruin Pudsey's face!

In the end, with all the bakers contributions and all the other lovely friends from work digging deep into their pockets and eating all the treats, I am very happy to announce that we made £68. 48 for Children In Need!! I am so grateful for everyones hard work and I am ecstatic for the money we raised for such a good cause!

You too can still donate by clicking on any part of this blog that says Children In Need as it will take you to the charity's donating page! 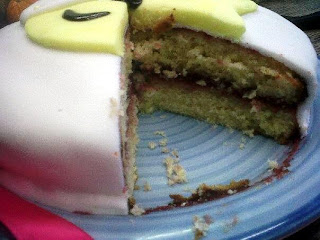 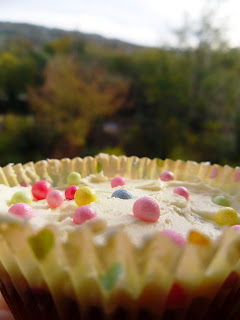 What a week I have had! I warn you in advance this will be a long post as it will be filled to the brim with birthday news and baking fun! Yes, this week I turned 22 and it is no surprise that with my recent and growing passion for baking I received a lot of baking themed presents, including the cards! I never knew how many cupcakes cards there were, and what's more they are all so pretty! Well, not to boast but I was very spoilt, I got a cupcake charm for my bracelet from my Dad, The Great British Bake Off book from my boyfriend, polka dot cupcakes cases from my friend Hannah, gingerbread men cutters from my boyfriends sister and brother in law (I think they might have seen my previous blog) and last but not least I got a traditional Masons mixing bowl and a flexible spatula from my boyfriends parents! I can't wait to get back into the kitchen! 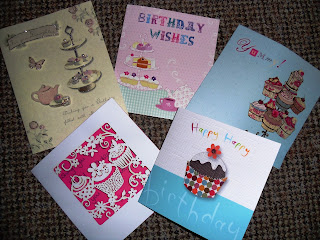 In terms of a birthday cake, I received the biggest slice of chocolate cake from my friend Kat from Patisserie Valerie in Bath. It was so big it had a whole profiterole on the top and it was amazing! Nice light filling and delicious chocolate icing! Heavenly!

However, this week was not only my birthday but my boyfriends twin nephews first birthday! They are so adorable I thought I would add to the presents that we already bought them by baking a selection of vanilla cupcakes! I woke up nice and early on the day we were travelling and baked right up until half an hour before we had to leave! As it was a special birthday I decided to get a little creative and make the icing three different colours, cream, light blue and light green, and filled with chocolate chips, perfect for two very cute boys! However I didn't stop there. I used the idea from the polka dot cupcake cases that my friend got me for my birthday and topped the cupcakes with multi coloured sugar balls! I was so proud they looked perfect! Well, for a little while at least... 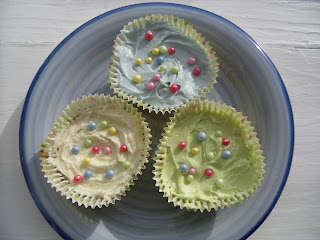 I had to take the cupcakes by hand to the party via the train, so when I popped into Boots to get a sandwich the most annoying and disappointing thing happened. I put my tin on the counter which had all my nicely decorated cupcakes inside and the man behind the till thought it was a Boots product and turned it upside down to find a price. Sad face. I yelled at him to put them down and after what seemed like a million minutes he did, but the cheeky git went one step further and asked for one as it was "his birthday". Not impressed.

I was very lucky that not all of them were ruined and I managed to salvage the rest, but best of all everyone at the twins birthday party seemed really enjoy them, especially the younger children who ranked them first 7 out of 10 and then 10 out of 10, but then again one child in particular did just keep asking for the sugar balls on top!

On a final note, I got talking to my boyfriends parents about baking and think the next thing I want to make is bread, especially now as I have my brand new bowl! I was recommended a recipe from River Cottage so here is the link and video of the recipe so you can enjoy too!

Sorry for the ramble! x
Posted by Amber at Monday, November 07, 2011 No comments: