You may have thought that I have fallen off the baking map, but don't fret, 2013 has been just as productive, and I now have a new recruit my boyfriend, Ashley! 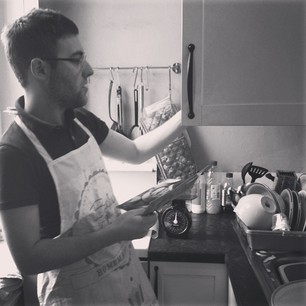 Finally!!! My baking addiction has rubbed off on somebody and it was only a matter of time before my boyfriend, Ashley, was the first to crack. Red Nose Day is just around the corner, and at the bookshop we both work at, we are selling the official Great British Bake Off Red Nose Day booklet. One afternoon my boyfriend came home with this and astounded me by saying that he was going to bake the giant chocolate chip cookies. Before I go any further I must point out, Ash LOVES cookies!! 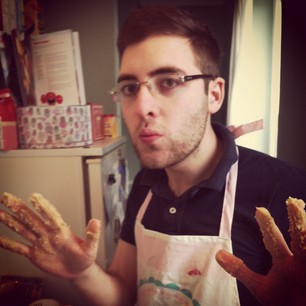 So after a few days of rummaging through my baking equipment and ingredients, Ash got baking. I am so proud to say that he did it was real ease and they were sooooo scrummy! He followed the recipe to a tee and they were perfect. The only problem with him following the recipe to scratch was that they only made 6... I could have eaten 6 just to myself! 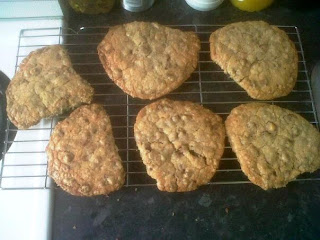 This, my lovely readers, is proof that baking is easy and fun!! He really enjoyed himself, and although he hasn't said when he will be baking next, I think he has caught the baking bug! YAY!

Now, if you got the clue from the title we move on to B, for Bread! 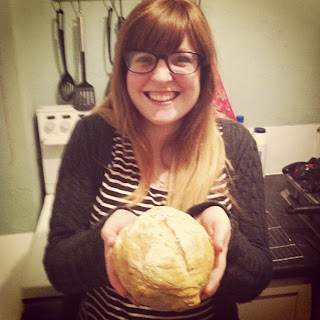 I have never made bread before, it looks so simple I'm kind of astounded that I have never attempted to make it before. Okay, this is a bit of lie I made bread in school, but I don't remember it and it was only what i was told to make, not what I wanted to make for fun. This time I got to scour through my increasingly growing pile of baking books and surprisingly chose a recipe from The Great British Bake Off book. I was intending to use a recipe from Mary Berry's Baking Bible, but this one was really simple for a first timer. 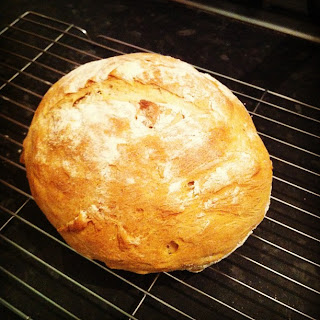 I can't believe how happy I am with the results!! They smelt and tasted so good! Ash and I gobbled half of one in one go with a bit of good old butter. I ended up making two small loafs and they were so much better than buying ready made, pre-sliced loafs from the supermarket. Now that I have made my first loafs I want to move on and make focaccia bread. Ash's dad made some at Christmas and it was probably one of the best breads I have ever eaten. I think I would either use his recipe or the well-loved Paul Hollywood's recipe, he does seem to be the bread king. 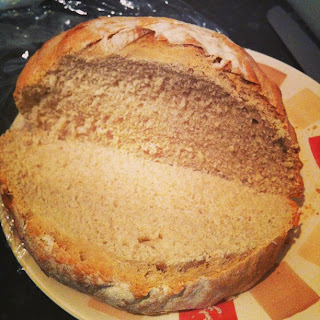 And finally on this baking post, we get to the letter C, for cupcakes. It has been a little while since I made cupcakes so this week I whipped up a batch using my go-to recipe from the Hummingbird Baker book. I had some left over raspberries and added them to the batter. It made a lovely batch, but not my best, some raspberry seeds got left in-between teeth... On the other hand, I finally decided to use some of the little things i bought at the Cake and Bake show i went to in 2012. I got some Royal Icing and made some little flowers for the top! I made them have a slightly marbled effect with pale pink going through, I thought this would tie in with the colour of the raspberries, and I also used pink cases to match. 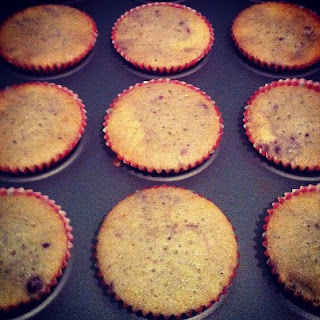 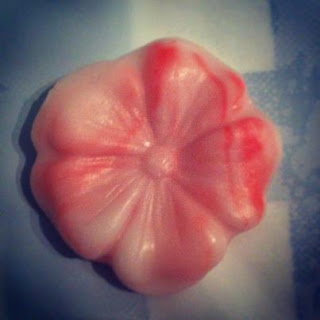 Now I would love to continue this theme and say that the next thing I will bake, will start with the letter D, but recently I bought my first tart tin, so I can finally make a tarte tatin, which I have been wanting to make for months!!

More exciting however, is that tomorrow I am actually going to meet the one and only Mary Berry!! So keep a look out for my next post, because it's going to filled with Mary Berry goodness! 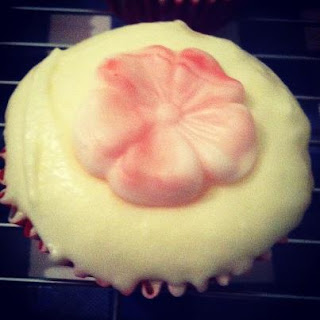