Recently I've been a bit naughty and spoilt myself with both cupcakes and cookies. By making this post it makes me feel a little less guilty as I am now calling it research, ha! 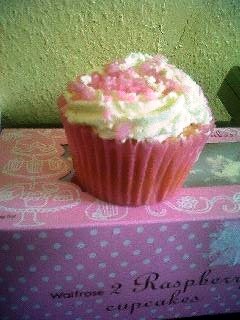 My first treat was a cupcake (or two) from Waitrose. It was a cupcake filled with a raspberry compote topped with whipped cream and decorated with pink nibbed sugar. About two months ago I bought a cupcake from Waitrose which was very similar to this one, except that the raspberry flavouring was in the icing and not inside the cupcake. However, I did not like it, the icing was too dry and it was all too sickly, I think that was perhaps because the cupcake was chocolate with a chocolate flake through the centre. I wasn't impressed. It surprises me that I therefore went for another one, but I was nicely surprised! The cupcake was light and moist and the raspberry compote was lovely and sweet, but not too sickly. The only point I am undecided on is the whipped cream instead of icing. I did like the whipped cream, especially with the little crunch of the pink nibbed sugar, but without icing it didn't feel like a cupcake to me. That didn't stop me eating it, or the one I saved for my boyfriend...

Now for the cookie. Well this was a real treat as a friend in work came in with a nice big box of Ben's Cookies, a little cookie shop tucked away in the Corridor in Bath. This cookie was absolutely delicious, it was chocolate orange and had a huge chuck of chocolate right in the middle! Cookies used to be a regular choice of pudding in my little flat as my boyfriend loves them, but we both agreed to cut back on them (and Dominoes) but I couldn't really say no to a Ben's Cookie! It was so nice and soft, you could tell it had been made that day, I just wish it had been warm that is my only little complaint! I have only had one other Ben's Cookie before, it was a milk chocolate one and was just as nice. What I especially like is that they price the cookies on weight, so if you pick a smaller one not only is it better for your waistline but a tiny bit better for your pocket!
Well, a little...

Would I buy them again..... Yes, but maybe only one this time

Would I buy them again.....Yes, definitely.

Between Ben's Cookies and Waitrose Cupcakes, without a shadow of a doubt, Ben's Cookies triumphed! Although the cookies won on this account, I think I will always prefer a cupcake, especially if I have made it myself. They are much prettier, come in lots of different flavours and textures and can be so creative. I love setting aside an afternoon and making a lovely section of cupcakes, they are definitely more of a delicacy. We can go through a bag of cookies in this flat in a matter or days without a thought, but if I make a selection of cupcakes they tend to last a bit longer and I think appreciated more as you can see the effort that has gone into them. Plus they are so much more fun to eat!